List doesn’t include those from 2008 and earlier (see photo descriptions below). 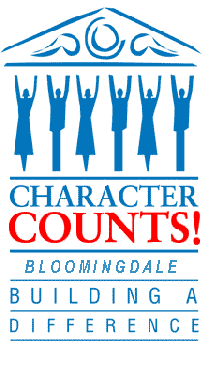 Every fall the Bloomingdale CHARACTER COUNTS! Coalition presents the American Youth Character Award Winners nominated by each of their schools. 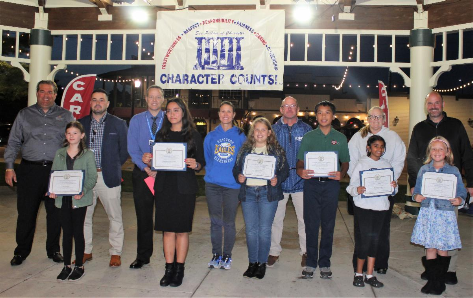 This year's theme was the Pillar of Caring. Over 500 people were in attendance at the 4 October Celebration Night. 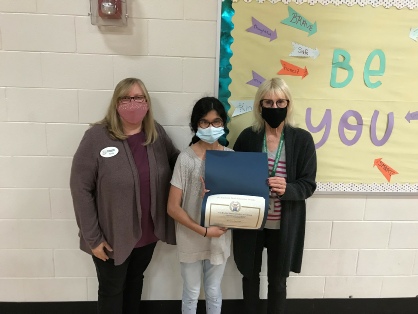 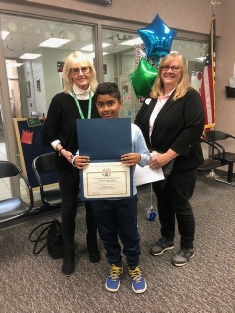 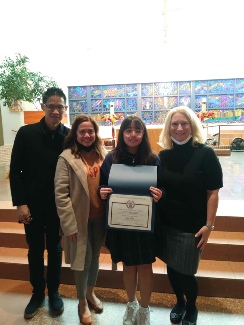 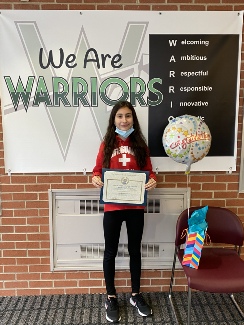 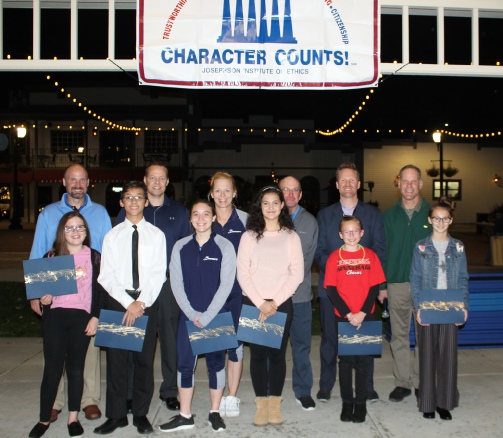 Theme of 2019 Celebration night (with a record 600+ attendees) was Responsibility. 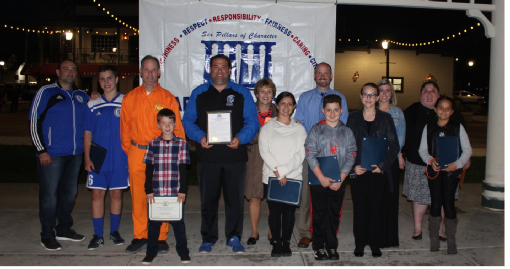 The Bloomingdale CHARACTER COUNTS! Coalition's annual Celebration Night was held on Tuesday, October 2 in Old Town Park. This year's theme was the Pillar of Fairness. The evening kicked-off with the Presentation of Colors conducted by the Bloomingdale VFW Post 7539, followed by the West Westfield Middle School Chorus and Band's performance of “My America”. Village Trustee Frank Bucaro read the Joint Proclamation of all of the Coalition members proclaiming CHARACTER COUNTS! Day in the Village of Bloomingdale.

The evening included the presentation of the 2018 American Youth Character Awards, (award recipients are pictured above with their respective school official).  The audience was entertained by student performances from Erickson, DuJardin, Winnebago, Westfield Middle, and St. Isidore schools. 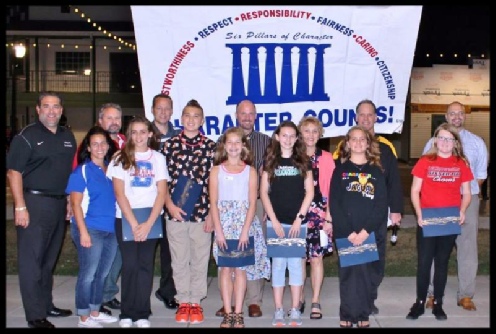 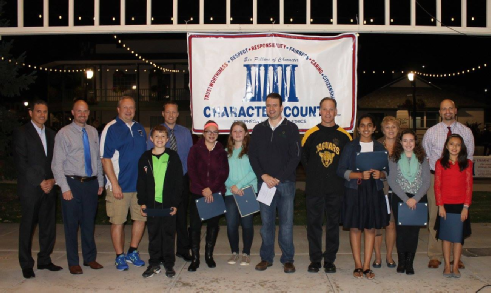 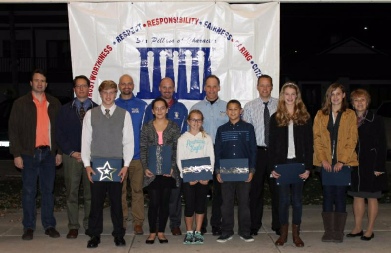 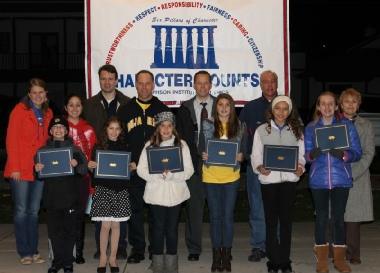 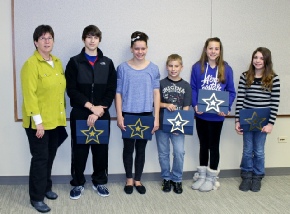 Each year, the Bloomingdale CHARACTER COUNTS! Coalition honors six young people who are nominated by their teachers and/or coach to receive a CHARACTER COUNTS! Youth Character Award for modeling one or more of the six pillars of CHARACTER COUNTS! - Trustworthiness, Respect, Responsibility, Fairness, Caring and Citizenship.

Jacob Lauing (DuJardin School), is a very caring young man who goes out of his way to help others. He recently organized and carried out an all-school, week-long juice box collection to benefit PADS of DuPage County. He is a great role model.

Kelly Zehnder (Bloomingdale Park District), has been a gymnast for the Park's Competitive Team since 2009. In the past four years she has exhibited strong leadership, and good sportsmanship as a team captain, as well as volunteering to take care of the little tumblers at their meets.

Dylan Alejandro (Winnebago School), is very responsible and always helps others, showing an extremely positive attitude. Last year, as a fourth grader on safety patrol, he was asked to take on more responsible roles, which he did with flying colors. He exemplifies several pillars of character. (Dylan is pictured right with Principal Jon Pokora.)

Bianca Olson (Erickson School), is a very responsible 5th grade student in her own studies, as well as respectful and helpful toward her fellow classmates. She is also exemplifies caring and citizenship as an active member of the school's service clubs, Character Counts! Club and Student Council.

Jennifer Hauser (St Isidore School), models the six pillars of character on a daily basis. She consistently exemplifies leadership. The eighth grader is always ready to step up to assist an adult or fellow classmate whenever someone needs help.

Alec Verven (Westfield Middle School), is a strong leader in the classroom. He always shows great respect toward both adults and his peers. He is considerate and helpful whenever someone is in need. The eighth grader has a strong work ethic and is a good role model.

Congratulations to these young people on their recognition. 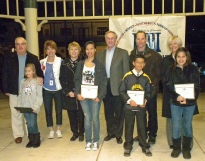 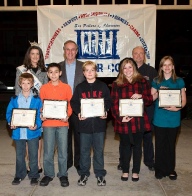 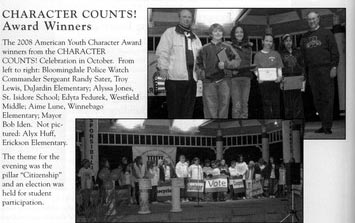 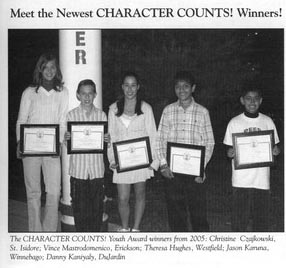 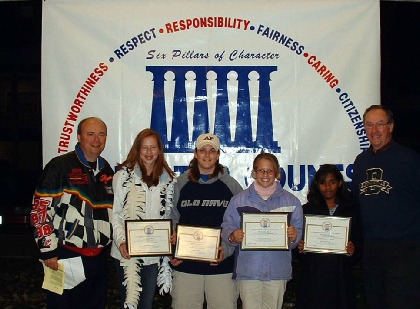 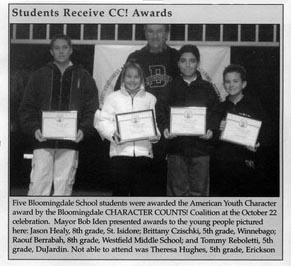 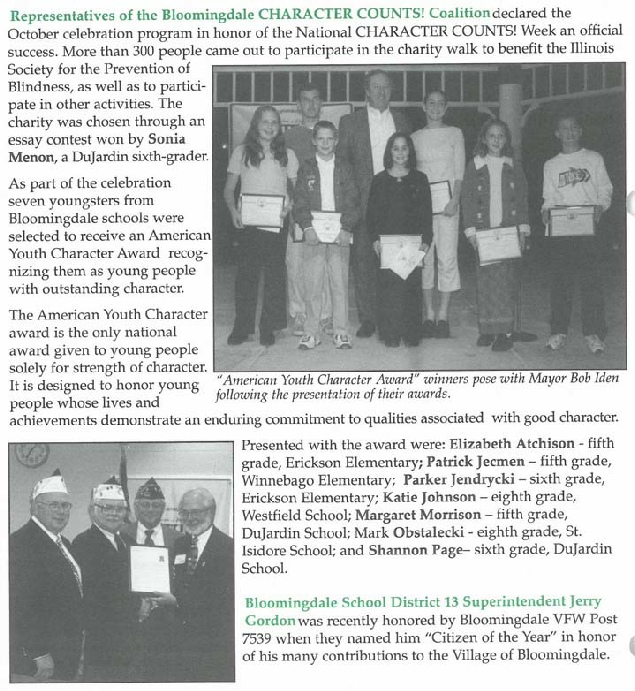